For the Love of Learning

An intrinsic love of learning shines through the vibrant personality in 8-year-old Kendall Alston. Her winsome nature is accompanied by genuine intrigue about life and new things around her. Within the first five minutes of her piano lesson, she is asking questions, laughing, and talking about school. Kendall, age 8, has been taking lessons through Musical Empowerment for three years. She decided to pursue the piano because of a love for music and when she saw her older brother playing. “I felt like I was bigger than how old I was,” Kendall shared, referring to when she first began taking lessons. Kendall learns on her own outside of lessons by watching YouTube videos and trying to play new pieces, including some by Beyoncé, her favorite artist. Kendall said she does not have too much time to practice though, “because [she’s] a cheerleader and read[s] and practice[s] multiplication.”

Kendall’s favorite subject in school is math. When Andrea Lane, her piano teacher, pointed to the treble clef and asked her to name it, Kendall started giggling and said, “I was thinking about math, I was about to say trapezoid!” As a second grader, she loves geometry, multiplication, and the challenges found in math. She loves learning and asks questions throughout her lesson. She wants to gain a deeper understanding of the material and is dauntless in inquiring about the most difficult topics.

Andrea can relate to Kendall’s interest in math. Andrea, a senior at UNC-Chapel Hill, is a biostatistics major who will pursue her PhD after graduation this coming May. She began playing the piano in third grade, and fell in love with the instrument due to its flexibility in allowing for creativity and variation of style. Her biggest challenge in teaching Kendall when they began two years ago when she was six, was gauging what subjects would be within Kendall’s mental reach. Andrea had difficulty looking back to when she started and determining a good pace at which to introduce topics in music theory. Since then, Andrea has noticed Kendall’s growing confidence and interest in more difficult topics.

Kendall’s mother, Melinda Sharpe, describes her daughter as “an all around happy girl.” Spending five minutes around Kendall’s sweet and spunky personality will confirm this. Andrea has thoroughly enjoyed getting to know Kendall and is inspired by her enthusiasm and how she “seems to love life and love learning.”

Kendall’s mother commented on Musical Empowerment, stating “we really enjoy the program and appreciate the opportunity to be involved.” Melinda also expressed her appreciation for the high caliber of instruction her children have received in conjunction with good communication with their family. Andrea echoed Melinda’s appreciation for Musical Empowerment, saying that she has been able to stay with the same student for three years, which has helped to establish habits, patterns, and a genuine bond with her student. She has no intention of breaking this bond, and plans to continue teaching Kendall if she accepts UNC’s offer for the biostatistics PhD program. 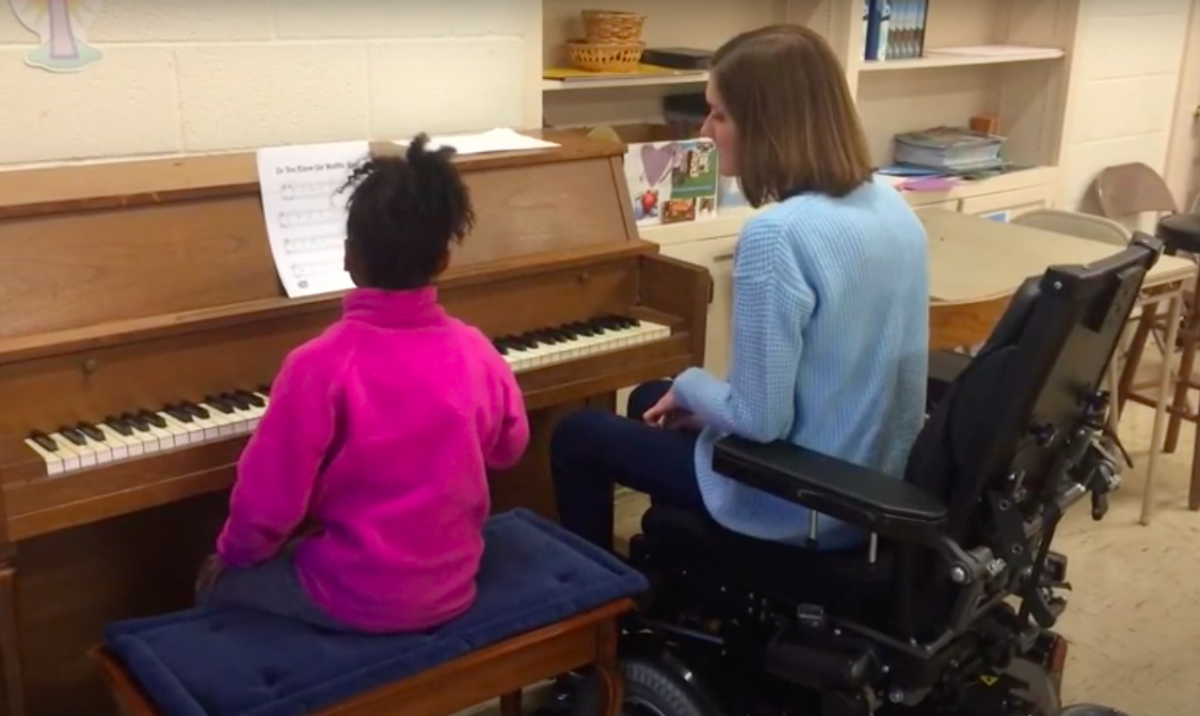 Andrea identified an additional element of why her time with Musical Empowerment has been so impactful: fighting inequality. “As an organization, it’s a great small way to fight inequality. Social justice issues are really important to me, and it’s a good way to combat these issues. [When I was younger], I didn’t consider it a place of privilege to have private lessons, but now I realize that it is.”

Kendall has the same passion for learning and achievement that Andrea does. As an 8-year-old, Kendall is already setting her sights high, and recognizes the merit of hard work and commitment. When asked what she has learned from playing piano, Kendall said without hesitation and a gentle smile to Andrea, “I learned if you play piano you can graduate from college.”